Congo was chosen as central element for the accomplishment of this espectacle because it is one of the most important cultural manifestations of Espírito Santo.

The presence of indigenous figure in this project is due to the fact, according some historians and folklorists, congo has its roots in the indigenous culture with the INDIGENOUS BANDS and gradually elements of the African and European culture were introduced. Currently congo is considered as a syncretism of these cultures.

Dance is movement and moviment is life. The movement without words is like a universal language. With it we can say more than words. Marionettes will come to life in the actors’ hands acting the congo trajectory  since indigenous band era up to our days.

Electronic music is a contemporary era symbol, however its inspiration comes from old rhythms. In our project, we will gather electronic music live (DJ) with the congo musicality from alive congo.

Graffiti is a genre of art irreverent which allows the artists to overcome in a short period of time. Three distinctive graffiti artists from favela will create live scenography with their drawings during the presentations on stage.

The project will also allow three youngsters to experience recording all the spectacle development. They will receive some basic guidances on how using the equipaments, but they will have freedom to record on their way. The intention is to know how will be the view of these youngsters about the spectacle.

By promoting the interaction between communities with different lifestyles through the art, the project will promote the artistic identity, will evolve the citizenship of these communities valuing its culture and will allow free access to these cultural goods once the performances will take place in open and free areas, thus the target audience will be people from all groups and ages.

The first stage of the project is the achievement of training workshops for the actors team and for the preparation the parts of the spectacle.

WORKSHOP OF MARIONETTES MANIPULATION,  STAGE MOVEMENT AND DANCE
VITÓRIA – The dance and marionettes workshop will be held by Peter Serge Butko, director from Czech Republic. Participants: actors and dancers from Vitória.

WORKSHOP WITH MOVIE
PLACES WHERE THE SPECTACLE WILL HAPPEN – The workshop will be held by TV professionals: Deyvison Reis / Peter Serge Butko.
Recording the documentary about the project. Participants: favela youngsters.

FINAL COMPOSITION OF THE PROJECT

The performance will happen in an open space where in the center will be actors and dancers with theirs marionettes, in the background and in the sides, will be three panels where graffiti artists will make their arts live and, around the space, the music represented by the alive congo, in other words, the traditional congo allied to electronic music DJˈs. 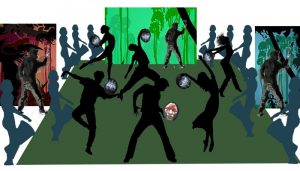 Next Picture producer will produce a documentary movie about the whole project development which will be introduced to National Television of Czech Republic. The movie also will take place in many festivals of documentary movies in all the Europe.

PREPARATION OF THE TEAM FOR THE PROJECT
Creative meeting with everyone inside the project.
BARRA DO JUCU

6  September
Performance in BARRA DO JUCU